For books and free notes for students, visit: Philosophy and Ethics. 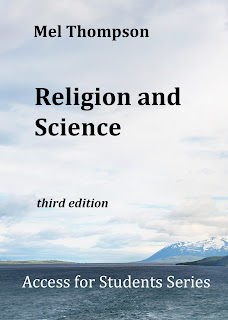 To err is human, but to make an absolute cock-up in the publishing of a manuscript requires the joint action of human, computer, dyslexic fingers and haste! I plead guilty!
Please accept my apologies if you have recently bought a copy of my cheap re-issue of the Religion and Science book, originally published as an A-level textbook by Hodder Education. It was only when a proof-reader revealed a good number of typographical errors and other mistakes, that I sensed something was wrong with the book. To start with I was simply frustrated, feeling sure that I must have corrected the errors a long time ago, then it gradually dawned; I had uploaded an uncorrected version of the text by mistake.
I have no hair to tear from my head, so that failed to be my first reaction, but a swift application of 'Finder' on my Mac revealed the terrible truth: files with almost identical names, sitting one under the other in a list, are all too easily confused. Or, to put it more accurately, I am all too easily confused by them!
All has been rectified now, I'm pleased to say. At the touch of a button, the corrected file is now being used by KDP.
I hope, if you did invest the £1.99 or $2.99 in a digital copy, that you were able to ignore my typographical imprecision, and enjoy the exploration of topics from 'Evolution and Design', through 'Miracles' and 'Scientific explanations of religion', to questions about the way in which modern science may require believers to re-think, or re-express, what they mean by 'creation', or those fashionably in the thrall of neuroscience to re-consider what it means to be human.
As with all my books, it is written from a humanist perspective that neither promotes nor denigrates religious belief. In the back of my mind lurks the question 'Does science render religion obsolete?' Not a bad question for a secular philosopher to be asking these days, since there are those who would claim that science also renders philosophy obsolete.  As you may guess, I don't go along with that suggestion!
What I will continue to argue, however, is that the big questions about what it means to be human, what values and qualities are worth promoting, and how we should relate to the world around us, are too important to be left to the conventionally religious. They are universal and desperately urgent. But at the same time, I would suggest that it would be a gross mistake (even worse than my uploading the wrong file!) to ignore the perspective that the world's religions have offered over the centuries. You don't need to buy into a raft of supernatural beliefs to appreciate that the world religions, both East and West, may contribute significantly to the debate about our future.
So if you already have a print copy on your bookshelf, or a download in your computer, please accept my apologies for the typos, and if you don't have one, you might find it a modestly priced way of spending a lockdown day pondering life's big issues.
To see more about this book, visit my website page by clicking here.
Posted by Mel Thompson at 09:03 No comments:

The most dramatic hike in the world? 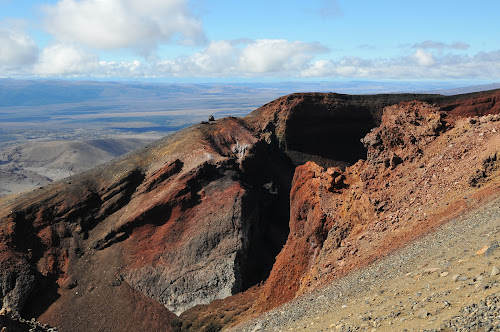 During lockdown, we walk the local woods, following paths that have been more used during the last three months than in the preceding decade. But while appreciating the familiar scene, my mind wanders and I find myself remembering some of the best hikes we’ve taken in days gone by, when one could travel the world and hike with, or even sit down next to, complete strangers.

Of the many I recall, the most spectacular by far is the Tongariro Crossing in North Island, New Zealand.  It is an unforgettable 8-hour hike over the volcanic heart of the island. 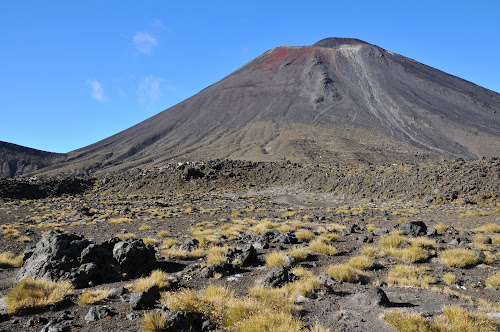 Deposited by minibus early in the morning, you ascend up the steep western flank of the National Park to the plateau below Mount Ngauruhoe - everyone's image of what a volcano should be. Some of the keenest - or most foolhardy - give in to the temptation to divert from the Crossing to scramble up to the top of its cone. I was no so tempted, but preferred to stay below with my camera. 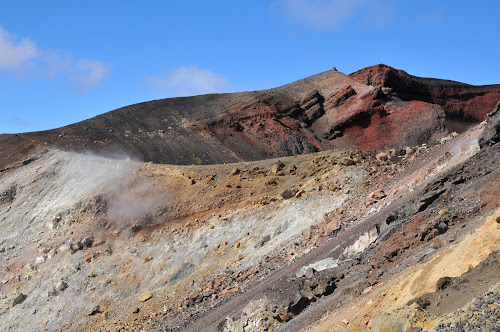 Then you then you turn towards Mount Tongariro and ascend to follow round the narrow edge of the Red Crater - seen here, top right - before descending a narrow ridge towards the Emerald Lakes.  The ground beneath your feet is hot. Steam hisses from the rocks. You do not even think of trying to leave the path. You sense you are on holy ground, or utterly threatening and unstable ground, whichever way you choose to see it. 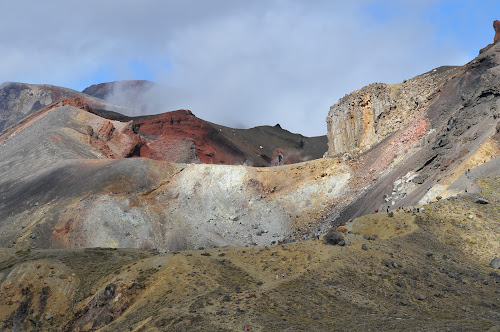 People descending the ridge on the right become no more than a column of ants. 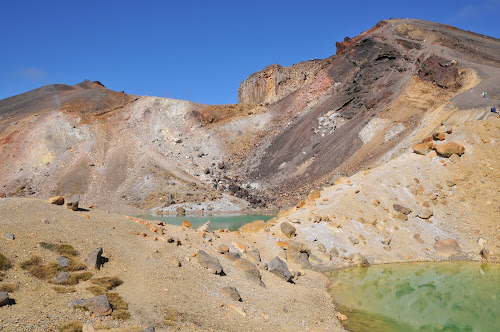 It feels almost indecent to step aside onto the pristine volcanic surface. And there is no need to ask why these are called the Emerald Lakes... 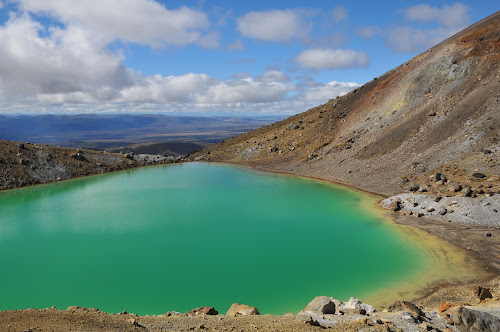 On the way down, you just have to keep turning to look back. 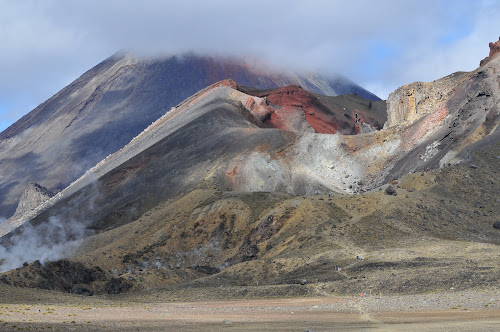 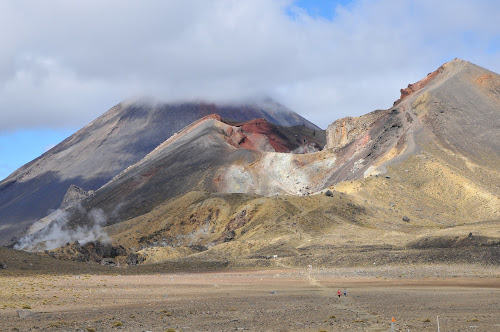 Anyone keen on hiking – and reasonably fit – should try this walk at least once in their life; I am unlikely ever to do it again, but it is a hike I shall never forget.

Posted by Mel Thompson at 07:06 No comments:

Email ThisBlogThis!Share to TwitterShare to FacebookShare to Pinterest
Labels: hike 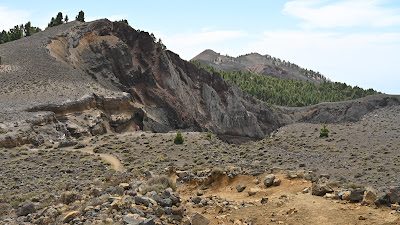 Sadly, this is not the view from my window! But of a walking route down the volcanic spine of  La Palma in the Canary Islands.

Here is Essex, human ingenuity is channelled even into the naming of modest companies.  A local window-cleaning firm boast ‘Vision Technologies’ on the side of its van! But that has prompted me to reflect on an all-too-common philosophical and political malaise.
Our attempts to shape the future tend to focus on getting rid of the grease and spots on the glass in front of our noses, rather than a vision of where we want to be.  It’s a necessary first step, or course, but never more than that. 'How do we get out of this particular hole?' appears to determine policy, rather than a fully thought-out vision.
We all have plenty of muck on the glass – determined by our social and political upbringing, our present needs and aspirations, and the prejudices that we have accumulated through life. So it's reasonable that the initial task of philosophy, like window-cleaning, shouldl be to clear the glass. That was the theme of the Logical Positivists early in the 20th century – clearing out nonsense in order that language might develop scientific precision.
However, as we now recognise, that aim was in itself just another prejudice, another smear on the glass.  The task of philosophy – a hopeless one in absolute terms, but none the worse for that – is to clear away all such prejudices. And, even if we can never achieve a ‘view from nowhere’, we can at least be aware of the somewhere that presently shapes our view.
As I contemplate the political world today - and particularly the response to Covid-19 - I just long for one thing above all else: decision making and policy implementation that is measured, carefully thought out, transparently explained, and genuinely unbiassed.
I shall scream if I hear yet again that politicians are simply 'following the science.'  Science is a methodology for gaining facts, not a compass for guiding political choices. It should always be factual and value-free. It is down to the politicians to use the facts it provides to inform their judgements.  Never blame the car for driving the wrong way up a one-way street!
Two images struck me recently, both related to this issue of glass and vision.   For some time I have been developing cararacts. I think that I can see clearly and that the colours I enjoy are real. In that sense my vision is adequate, and I am thankful for it.  But I am also reminded that the ‘early opacities’, from which the optician tells me I am suffering, imply that, if the experience of those who have cataracts removed is anything to go by, once those opacities are removed I shall suddenly realise an enhanced intensity of colour and detail.  My existing philosophical prejudices are but opacities, perhaps never capable of being completely removed, but worth being aware of when I describe what I see.
The other image concerns photography.  I confess to being a pixel-peeper – the sad term for someone who routinely examines his or her photographs at pixel level on the screen in order to inspect them for sharpness, and aberrations. Pixel peeping shows up faults in photographic equipment and technique that a full-screen view masks.  Of late, I’ve noticed that, when I use one of my better lenses, I find myself no longer looking at pixels themselves but enjoying the recorded reality rather than the image. I’m not aware of the image, only of the view photographed.
Now that may be a sign of recovery from a rather sad obsession, but I think we can learn from it.  Those who engage in philosophy tend to examine in some detail the logical and conceptual apparatus by which we understand the world. It may appear useful, but it can lead to a obsession with the details of argument that is the equivalent of the obsessive pixel-peeping of the photographer.  However, at its best, philosophy can transcend itself and give way to a direct and seemingly intuitive understanding of reality.
In other words, we may recover from philosophy in order to see more clearly, just as we may recover from the obsession with photographic technique in order to appreciate what it is we are viewing.
In the Zen tradition, the intention is not to pretend to a clever insight, or to develop a unique awareness, but simply to see things exactly as they are.  I think some of our political leaders could benefit from that approach.  Giving attention to 'What needs to be done?' rather than 'How are we doing?' would be a good start. As would taking responsibility for decisions, rather than claiming to be just 'following the science', thereby lining up a potential scapegoat for when things go wrong.
Get your windows cleaned, not in order to admire their cleanliness, but in order to look through them.
Posted by Mel Thompson at 03:26 No comments:

Mel Thompson
Thundersley, Essex, United Kingdom
I'm interested in all aspects of philosophy and ethics, but particularly in how we balance intellectual integrity with an emotionally satisfying view of the world. I'm an atheist with Buddhist inclinations and a residual love of religious art, music, ritual and architecture. I'm also a keen amateur photographer. 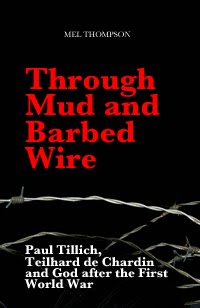 The story of two great religious thinkers who found themselves on opposite sides in the First World War and its impact on their lives. 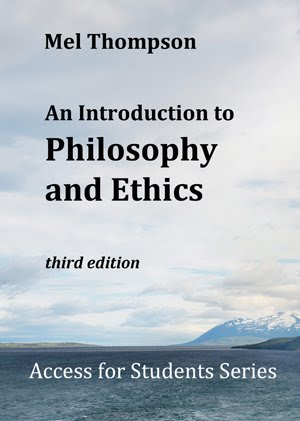 This re-published introduction to Philosophy and Ethics, is now available from only £1.99 / $2.99. Click the cover to take a look at what it offers.